skip to main | skip to sidebar

Where it all began... 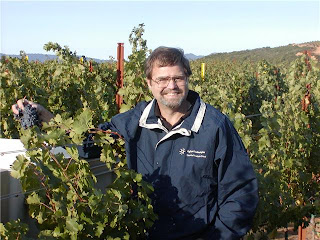 Lonen Curtis's passion for wine is the heart of Jocelyn Lonen Winery. In 1996 Lonen Curtis embarked on a journey to pursue winemaking when he planted a vineyard in his own backyard in the beautiful Santa Cruz mountains. His high-powered executive experience gave him the drive and focus needed to launch a premium boutique winery. The following year Lonen and his wife, Susan, as well as his daughter, Brandi and her family, moved to Napa Valley to pursue his dream. Lonen worked tirelessly to lay a strong foundation for Jocelyn Lonen and by the 2002 vintage the Lonen Napa Valley Cabernet Sauvignon received 90pts from Wine Spectator! It was a dream come true for the couple who always spoke of retiring to "Golf and Grapes"...

Brandi partnered with her father, launching the brand in as many markets as possible and creating a family image of the winery. They co-managed the winery and when Lonen passed away in 2004 from brain cancer, it was Brandi who led the team forward with their vision. Since that time it has been Brandi's vision, passion and management that has created what Jocelyn Lonen is today.

She dedicates herself to maintaining the winery's reputation of creating premium wines at affordable prices while furthering her father's dream. Many customers comment on the quality of Jocelyn Lonen wines and how they trump many wines at twice the price! Jocelyn Lonen believes that everyone should have access to ultra-premium wines regardless of budget, especially in today's economy.

In 2009, Brandi re-launched the Lonen label, which produces a $20 Napa Valley Cabernet Sauvignon and $10 California Chardonnay. She wanted to create something that would blow anyone away at the price point for years to come. She strives to leave the consumer floored at the value they get in each bottle. The line has been so successful that the production will be doubled this year!

Although Susan Curtis is not directly involved with the winery she continues to be Jocelyn Lonen's biggest fan sharing wine with others everywhere she goes as well as her and Lonen's story. Due to her passion and support, the winery sponsors various charity events through non-profit organizations like Golf and Grapes, to accelerate the finding for a cure for brain cancer.

To find out more information about tasting Jocelyn Lonen wines the next time you are in Napa Valley please go to www.jocelynwines.com
I'm reading: Where it all began...Tweet this! Posted by Jocelyn Lonen Winery at 2:39 PM