skip to main | skip to sidebar

Clambake for a Cure! 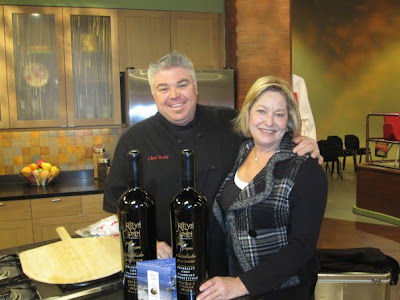 Jocelyn Lonen Winery just hosted the first annual Golf & Grapes Foundation’s Clambake for a Cure event! The event was held at a private estate in the Carmel Highlands on February 11th, 2010. The event followed the first round of the Pebble Beach National Pro-Am, formerly and affectionately known as the “Crosby Clambake”. All in all, it was a successful event!

The Clambake for a Cure event opened with beautiful sunny skies and stunning ocean views, which placed guests in a generous mood to raise money for brain tumor research. As some know, Susan Curtis inspired the idea of the Golf & Grapes Foundation in memory of her late husband, and Jocelyn Lonen Winery founder, Lonen Curtis III, who passed away from brain cancer in 2004. Thus, it was only fitting that the Clambake guests sip Jocelyn Lonen Winery’s mouth-watering new releases-2007 Founder’s Chardonnay and 2006 Founder’s Blend, which honor founder, Lonen Curtis III, all while perusing auction items.

The charity event also featured ten other wineries, predominantly from the Atlas Peak Appellation, where Jocelyn Lonen also grows its red varietals. There were seven celebrity chefs present competing to produce their best clam dishes for guests to enjoy! Three area restaurant critics attended to judge the dishes, determining who won the Critics’ Choice Award. Guests also voted to determine the People’s Choice Award. The winner of both awards was the great Todd Fisher, who owns The Kitchen in Monterrey! His “Broadway garlic, clam pizza” was quite the hit and even featured on View from the Bay on February 15, 2010. The picture above is of Todd Fisher with Susan Curtis on View from the Bay!

In addition to clam dishes, the chefs produced a variety of delicious appetizers for everyone to indulge in. Guests were frequently overheard stating they had never before been to a charity event which had such excellent wines and delicious food!

Guests participated in the Silent and Live Auction lots which included rare wines, art, and wonderful resort/golf/spa/dinner getaways in order to raise money for the continued battle against brain tumors. Also on site were PGA Tour Pros and celebrities attending the Pebble Beach National Pro-Am such as Brett Quigley, Jonathon Byrd, Bobby Clampett and Cindy Rarick! The event was absolutely fabulous, which is why Executive Director of Golf and Grapes, Sam Peters, is already planning next year’s Clambake for a Cure. For more information please visit http://www.golfandgrapes.org

Thank you to all who participated, donated and supported this first-time event. It would never be possible without such a supportive community!
I'm reading: Clambake for a Cure!Tweet this! Posted by Jocelyn Lonen Winery at 9:43 AM